When one says the word samurai, most imagine an armored man fiercely wielding a katana, and if one would to say female warrior, most would probably laugh and tell him to stop watching anime all the time. Nevertheless, women samurai, also known as onna bugeisha (女武芸者), were a small but very important representation of the Japanese upper class bushi (samurai) and some of them (e.g., Empress Jingu, Nakano Takeko, Hojo Masako or Tomoe Gozen) had a great impact on the Japanese history.

One of the most famous onna musha (female warrior, 女武者) was Tomoe Gozen (巴 御前, 1157?–1247?), wife and general of Minamoto Yoshinaka of the Minamoto clan. I’ve been planning to write about her for a long time already but something always came in the way. However, this month’s Japan Blog Matsuri theme—famous Japanese people—finally incited me to drop a few words about her. 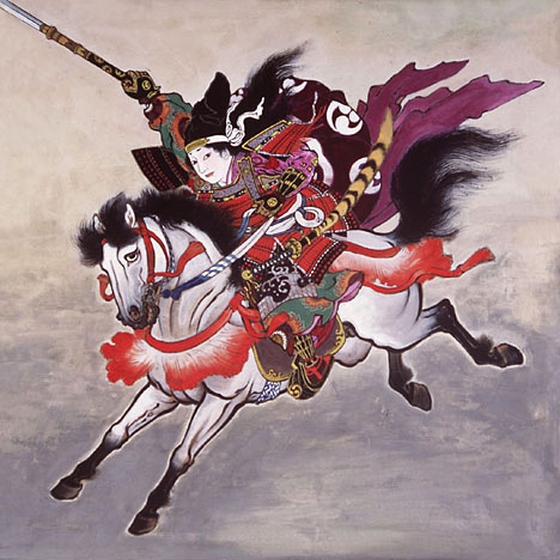 Tomoe Gozen on a horse.

First of all, nothing describes her better than a quote from the famous The Tale of the Heike (heike monogatari), the epic account of the Genpei War (1180–1185):

Tomoe was especially beautiful, with white skin, long hair, and charming features. She was also a remarkably strong archer, and as a swordswoman she was a warrior worth a thousand, ready to confront a demon or a god, mounted or on foot. She handled unbroken horses with superb skill; she rode unscathed down perilous descents. Whenever a battle was imminent, Yoshinaka sent her out as his first captain, equipped with strong armor, an oversized sword, and a mighty bow; and she performed more deeds of valor than any of his other warriors.

After defeating the Heike, Minamoto no Yoshinaka desired to be the leader of the Minamoto clan, which in turn provoked the Battle of Awazu (February 21, 1184) against his cousin Minamoto no Yoritomo’s forces; one of the last battles of the lengthy Genpei War. Although Yoshinaka, alongside Tomoe Gozen and his milk brother Imai no Shiro Kanehira, fought bravely, they were outnumbered and lost the battle. When Yoshinaka was defeated, he told Tomoe Gozen to flee because he wanted to die with his foster brother and would be ashamed if he died with a woman. 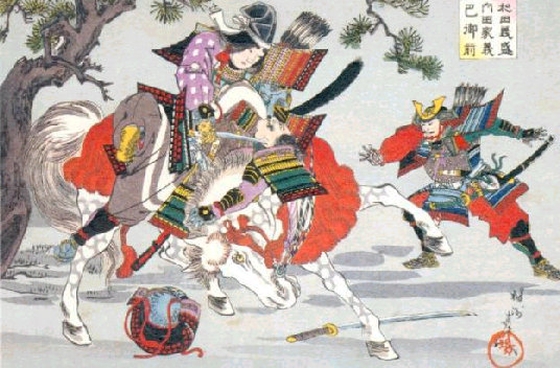 There is a lot of discrepancy as to what followed, but whatever happened, Tomoe Gozen was remembered long after, had a great impact on much of the warrior class—interestingly enough, especially naginata schools, even though this wasn’t her weapon of choice—, appeared in numerous art plays such as Tomoe no Monogatari as well as ukiyo paintings, and continues to be featured in Japanese novels, manga, anime and movies to this day.