This article is a part of the series on cultural connection between Japan and Russia.

When I first came into contact with Japan, I was amazed by how many Russian and Soviet things are popular in Japan, sometimes much more so than in my home country of Russia. In the following few articles on this blog I will look at some of them, compare their popularity to that in Russia, and try to analyze the reason for their success in Japan.

A good example of the above is the theremin, one of the first electronic musical instruments, invented by Léon Theremin (Лев Сергеевич Термен). Also known as termenvox, it is operated by varying the distance between one’s hands and the apparatus, without any physical contact.

The instrument was a product of Russian government-sponsored research into proximity sensors and can be used to play any musical genre. The young Russian physicist Léon Theremin made his invention in October 1920, shortly after the outbreak of the Russian civil war. He got very positive reviews at various Moscow electronics conferences and finally presented his device to Vladimir Lenin.

Lenin was so impressed with the device that he began taking lessons in playing it and commissioned six hundred of the instruments for distribution throughout the Soviet Union. Unfortunately, despite the fact that this ‘magical creation’ truly amazed the rural population of the country, the instrument never really gained enough traction in the union and Theremin was finally sent on a trip around the world to demonstrate the latest Soviet technology and the invention of electronic music. 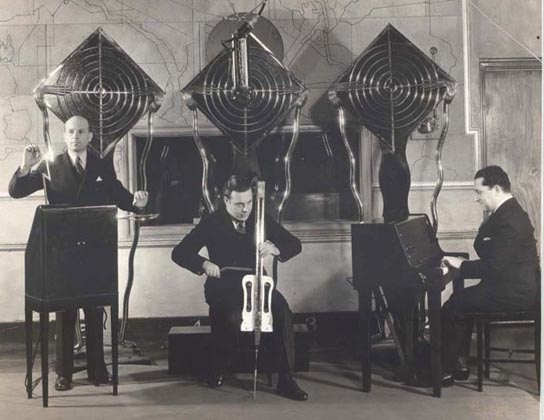 After a very successful tour of Europe, Theremin moved to the United States where he stayed for the next 10 years. There he patented his invention, granted commercial production rights to the RCA, performed many concerts (including one at the Carnegie Hall), co-worked with many famous composers (e.g., Joseph Schillinger) and physicists (e.g., Albert Einstein), and reportedly also spied for the Soviet secret services. 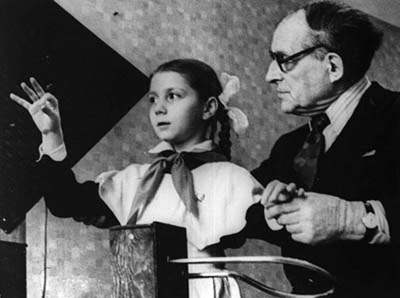 A nine-year-old Lydia Kavina with her mentor, Leon Theremin. (1976)

Some qualities of thereminvox made it an ideal instrument for film soundtracks, and it was used in many famous films such as Hitchcock’s Spellbound, Wilder’s The Lost Weekend and the renowned 1951 science fiction epic The Day the Earth Stood Still.

Nowadays, virtually all performance-quality theremins are sold and manufactured in the US. However, this instrument is perhaps even more popular among amateurs, and the low-end theremin market, most of which are made in Japan, continues to flourish to this day. Several relatively cheap and very compact models can be easily bought in Japan and enjoy popularity both among children and adults. Unlike their US-counterparts, they even tend to present some Cyrillic on their packaging, because the four Japanese scripts apparently aren’t enough to describe this beautiful instrument.

Why is theremin so successful in Japan? Most Japanese people love technology and many are curious about (especially strange and uncommon) foreign inventions of all kinds. Additionally, this is not the only non-native musical instrument or genre that gained unexpected popularity in Japan, as can be seen with the ukulele (today, Japan is considered a second home for Hawaiian musicians and ukulele virtuosos) or reggae.

If you want to learn more about this wonderful instrument, you should certainly watch the acclaimed and award-winning 1994 documentary film Theremin: An Electronic Odyssey and read the great article at Eichler Network. To be the first to find out when I publish the next article in the series, please subscribe to the RSS, follow NihongoUp on Twitter and become a fan on Facebook.