Shiritori (しりとり) is a Japanese word game in which the players are required to say a word which begins with the final kana of the previous word. しりとり literally means ‘taking the bottom’ as the Japanesee language is traditionally written in vertical columns, from the top down. 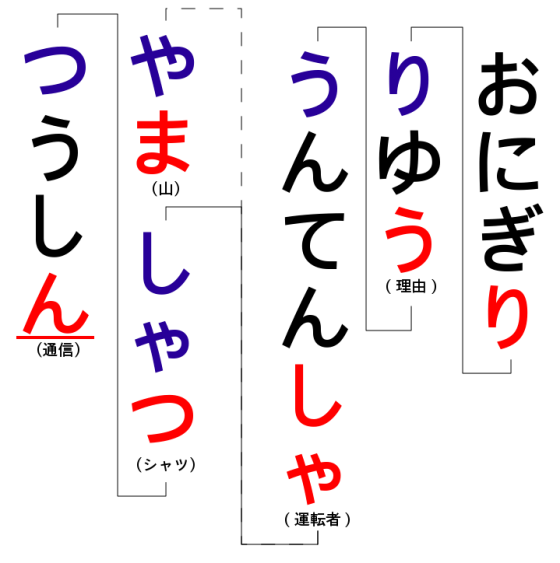 Similar word chain games exist in other languages as well, but they are rarely as popular as the Japanese variation, probably because the language is very well suited to this type of activity.

The basic rules are:

When playing in a group, a person who is in contravention of one of the rules is ‘out’ and adjudicates for the remaining players.

If you want to make the game easier to play, dakuten and handakuten may be ignored (that is, スープ could be followed by ふろ), and homonyms spelled with the same kana but different kanji—e.g., す can either be spelled as 巣 (nest) or 酢 (vinegar)—may be permitted.

On the other hand, if you are getting bored with the simplicity of the basic rules, you may limit words to a certain genre, restrict the length of the words to three or more syllables, or only permit words beginning and ending with dakuten or handakuten. You may even go as far as to use the final two kana instead of the last one (in which case only the first kana may not be ん).

Why not suggest playing this fun game to your Japanese class or among your Japanese friends and co-workers? It’s a great way to boost your vocabulary! If you’d like to test your skills right now, feel free to play shiritori at the NihongoUp Forum.

If you’d like to improve you knowledge of Japanese vocabulary, please check out our language lessons, games, and applications! And if you don’t want to miss any of our future blog posts, subscribe to the RSS, follow NihongoUp on Twitter and become a fan on Facebook.