Since the release of NihongoUp Desktop, I have received countless e-mails asking me to port the game to mobile platforms. First, roughly a year ago, the game was ported to the iPhone. Now, and Android version was just released, and the brand new NihongoUp Phone will soon allow you to learn Japanese with a Windows Phone 7.

NihongoUp Android has nearly all the same features as the desktop version of the game. You can use it to learn hiragana & katakana, as well as review JLPT kanji, vocabulary & grammar (particles, counters and transitive verb pairs). All that when playing a game with highscores, bonus streak multiplier, etc. In fact, it is the desktop Adobe AIR application (with slight modifications, of course). 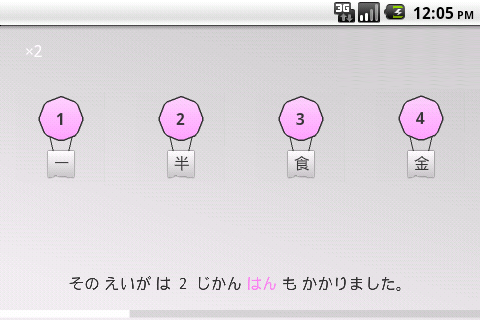 On a related note, if you are interested in a port for the upcoming BlackBerry PlayBook, please let me know in the comments. The new tablet will support Adobe AIR and if there are enough users interested in playing NihongoUp on the device I will surely do my best to make a PlayBook version available.