Hiragana (平仮名) and katakana (片仮名) are the two Japanese syllabaries collectively called kana. A syllabary is a set of symbols representing syllables, however, this isn’t entirely true in this case. Japanese language (as well as kana, for that matter) is based on morae (sg. mora)—units of sound used in phonology.

Every word in Japanese is written with the same number of kana characters as there are morae in the word in question, yet it doesn’t necessary have the same number of syllables. For example, the words Tōkyō (to-o-kyo-o, とうきょう), Ōsaka (o-o-sa-ka, おおさか), and Nagasaki (na-ga-sa-ki,ながさき) all have four moraeand are written with four kana characters, yet they have two, three, and four syllables respectively. It is  crucial to understand this difference, the importance of morae versus syllables, in order to perfect one’s pronunciation, as well as understand many of the Japanese written arts (e.g., haiku).

Hiragana developed from cursive script style of man’yōgana (Chinese characters used for their pronunciations) sometime around 800 AD. It was initially not accepted by everyone and only gained popularity among educated women. For example, The Tale of Genji and other early novels by female authors used hiragana extensively or exclusively. Later on men started to use the new writing system for unofficial writing, but Chinese, and later a combination of Chinese and katakana, was still a standard for official documents. It is not until modern times that hiraganastarted to be used on par with katakana and kanji both in day-to-day life and formal texts. If you would like to learn more about the history of hiragana, I suggest you to read the great guest post by Brett Fyfield at Caught*Red-handed: The Origin of Hiragana.

Katakana—characterized by short, straight strokes and angular corners—is the simplest of the Japanese scripts, but the similarity of the characters also makes it the more difficult to read and learn for a beginner. It was developed around the same time as hiragana from parts of man’yōganaas a form of shorthand. At first, it was mostly used alongside Chinese by the male population. Today, kana is used on a day-to-day basis to write foreign words and names, animal names, for emphasise, and to illustrate some of the sounds in manga.

To follow up on my thoughts on the use of romaji and to respond some of your questions, let’s talk about kanamojikai (カナモジカイ). While most of the Japanese linguists at the end of the 19th and the beginning of the 20th century were mostly considering the adoption of romaji, Yamashita Yoshitarō, the founder of Kanamojikai, started to work on an improved version of the native kana syllabary. The project started around 1914 and its aim was to completely replace kanji and hiragana with katakana.

As I have discussed in the previous article, the nature of the Japanese language presents many obstacles to the adoption of an alphabet or a syllabary in place of kanji. However, as the need for Japanese language typewriting machines increased every day, Yoshitarō didn’t mind spending several years to study and resolve any potential  problems.

Firstly, he deprecated vertical writing. Secondly, he added spaces between words. Last but not least, in order to at least somewhat improve the recognisabilityof word shapes (incomparable with western alphabets), he proposed completely new letterforms—something unheard of in the past. The new typeface which he commissioned from Hirao Zenji and Cabinet printing office staff member Saruhashi Fukutarō, presented simplified shapes and many features inspired by western type. Unfortunately, despite his life-long efforts, he didn’t succeed to promote the idea before his death. 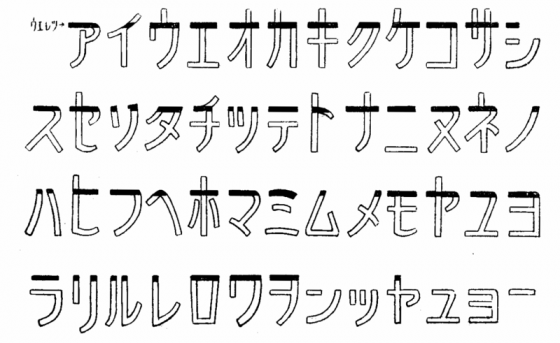 Finally, for those of you who still haven’t mastered the two syllabaries, here’s the promised cheat sheet. Use Kana101 and the cheat sheet to learn hiragana & katakana, then review characters with the NihongoUp Game.

Would you like a high quality poster or a laminated cheat sheet? Get yourself a Japanese bundle!