Many people think that there were historically no horses in Japan, but that’s far from reality. I couldn’t find any central place with information about Japanese horse breeds and thus, after lots of research, I decided to write an article on this topic, and this month’s Japan Blog Matsuri theme—Nature and Japan—finally incited me to publish it. I hope that you’ll enjoy this post, especially if you’re interested in equestrianism.

There is a total of 8 horse breeds native to Japan and despite the fact that all of them are ponies, they played an important role in the Japanese history, being used for work, pleasure, and in combat. Unfortunately, all of them are very rare, and except for the many recently formed organizations fighting for their survival, some of them would already be extinct. 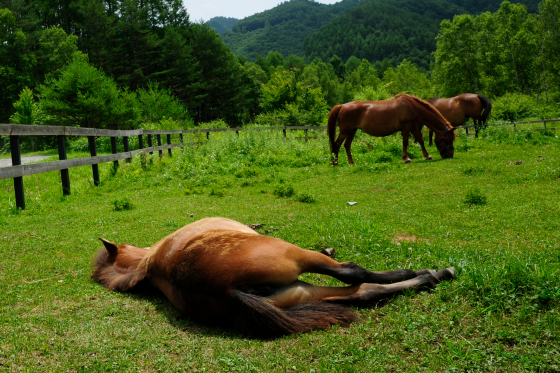 Despite the fact that students are frequently thought otherwise, it is believed that at least one horse breed is indigenous to Japan, and that breed is Kiso uma (木曽馬, uma means horse in Japanese). If you’re into archeology, check out this excerpt from page 291 note 50 of Himiko and Japan’s Elusive Chiefdom of Yamatai: Archaeology, History, and Mythology by Professor J. Edward Kidder, Jr.:

Horses have come and gone from the ancient Japanese scene, one vocal school of thought claiming that fluorine absorption and carbon-14 tests on horse skeletons from “so-called Jomon sites” have proved to be of recent animals (Mabuchi 1993:4, 652). On the other hand, the shell-mound database indicates they had at least existed there, but perhaps were not seen within the Yamatai polity as they were not found to be of much use. The type was the small Kiso horse, named after the area through which the Kiso River runs, from Nagano prefecture through Gifu and into Ise Bay west of Nagoya city in Aichi prefecture. This database of the Jomon period lists 532 sites with horse bones, starting about the time of Late Jomon (Oikawa, 62:7). They apparently had not all been eaten or become extinct, as some Yayoi horses were a little larger (Mori 1974b:236-237), perhaps as a result of domestication. Why so many “modern” horses are said to be buried in shell-mounds is beyond explanation. Korean horses were introduced around the middle of the Kofun period, and were never very large…

Originally also used for military farming and combat, this small horse is nowadays mainly raised in Nagano and Gifu, and used for riding purposes. 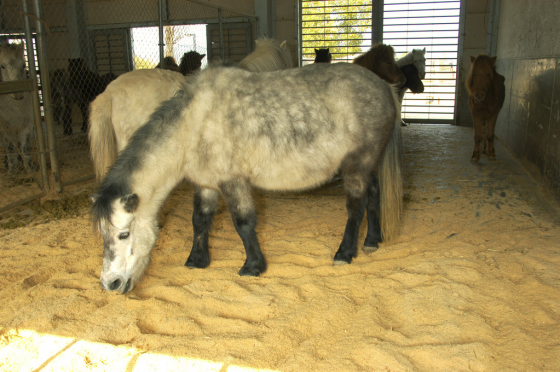 Perhaps the best known Japanese breed is the Noma uma (no, it has nothing to do with Numa numa, and is written 野間馬 in Japanese) from the Noma region of Imabari in Ehime Prefecture. Originating in the 17th century from Mongolian stock, it is the smallest of the native Japanese horse breeds. Valued for its gentle personality and strength, they were used for riding, light draft work, and as packhorses on the steep mountainsides in the rough Noma Region. Nowadays, they are mostly used as riding horses for children and as study subjects in local schools.

It is said that in the early 17th century, Lord Hisamatsu of Matsuyama Han charged local farmers with breeding his warhorses, and the breed grew to popularity until the Russo-Japanese war in 1904, when the Japanese army were surprised by the much larger horses of their enemy. This led to a Japanese military breeding program; new breeds were imported to be bred and trained for war. While this had many positive side effects, such as an increase of interest in breeding and racing horses, it also nearly led to the extinction of native Japanese horse breeds. The newly formed Japanese Agency of Equine Affairs (ばせいきょく, 馬政局) banned all breeding of small horses and by 1970 there were only 6 purebred animals remaining. It’s only thanks to the stubbornness of a few farmers who illegally kept the horses for farm work that we still have the Numa ponies today. As of 2008, there are now 84 purebred ponies in existence. 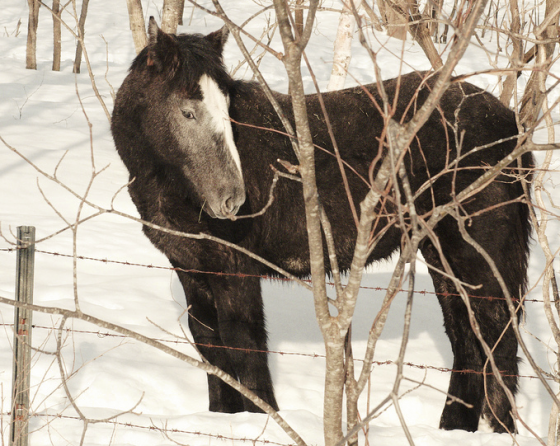 Another popular Japanese breed is Hokkaidō washu (北海道和種), more commonly known as Dosanko (道産子). It is said that the Dosanko was brought to the Hokkaidō by fishermen from Honshū during the Edo period (1600–1867). They were used for transportation, but were left in Hokkaidō when the fishermen returned home in Autumn. The ponies were expected to survive in very harsh weather, in a land with very little vegetation and covered with snow, which is how they developed the Hokkaido pony developed it’s exceptional enduring strength for which it is known nowadays.

Unlike the Nanbu breed, of which the Hokkaidō pony is considered to be a descendant, and which no longer exists, the Dosanko is the most plentiful of the remaining ancient Japanese ponies, numbering at around 2000. Today, it is still used for heavy transportation in the mountains unreachable by truck. Some ranchers in Hokkaidō even continue to winter the horses in the mountains, continuing the breed’s hardiness. They feed mainly on bamboo grass and wander around in the mountains in search of it till spring, when they return to the ranches without assistance, as during this time the bears awaken from hibernation and start to prey on the foals. 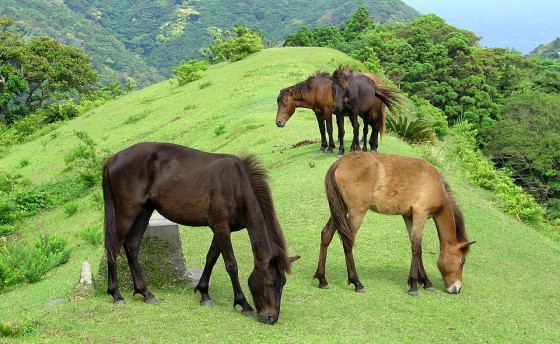 The third horse breed that we’re going to talk about is Misaki uma (御崎馬/岬馬). Misaki is of pony height, yet it has horse characteristics and proportions. It was first identified in the historical record in 1697, when the Akizuki family of the Takanabe Clan rounded up feral horses and developed a pool of breeding stock. However, following the end of World War II, the Misaki were designated as a National Natural Treasure and nowadays they returned to feral life, mainly in a designated National Monument on Cape Toi at the south end of the Miyazaki Prefecture, attracting many tourists to the region. 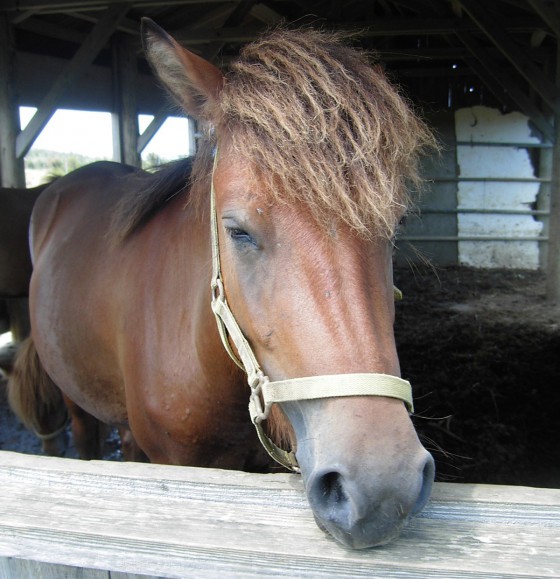 Miyako uma (宮古馬) originated from Miyako Island in Okinawa, prefecture known as a horse breeding area for centuries. In 1055, population of the breed peaked at around 10,000. Unfortunately, the increase of motorization cause this number to declined, and by 1983, there were only seven head alive. The population grew to 25 horses by 1993, but had dropped back to 19 by 2001, despite the great efforst to preserve this breed of great antiquity. The Miyako resemble Mongolian horse and nowadays they are mainly used as riding ponies, and sometimes for light draft work. 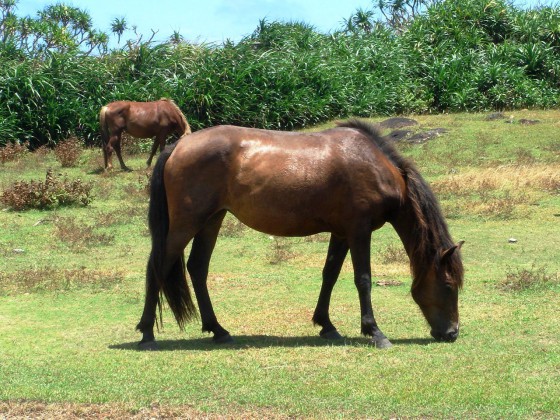 The Yonaguni uma (与那国馬) is a breed native to the southwest of Japan, specifically the Yonaguni Island. In 1939, when all local breeds began to be improved to produce larger war horses, the Yonaguni on their remote island were excluded from the plan, and the breed has been preserved. Still, due to the mechanization of agriculture, their number progressively decreased. Today, fewer than 200 individuals are known to live in Japan. 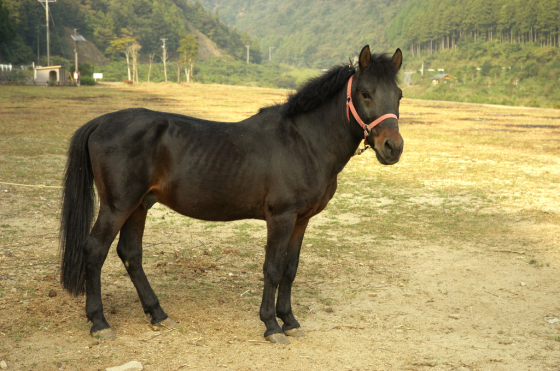 Taishō uma (対州馬), also known as Taisu or Taishuh, originated on the Tsu Island of Japan. It is an ancient breed, believed to date back to the eight century. In 1920, there were more than 4000 of them, but only about 65 heads remain. Due to their gentle nature and strong willingness to obey, Tiashō are often ridden by farmers’ wives and children. However, they are also known for endurance and ability to survive on little food and severe weather, and may be used for light draft. While in 1920, there were over 4000 Taishuh on the Tsu Islands, fewer than 70 of them exist today. 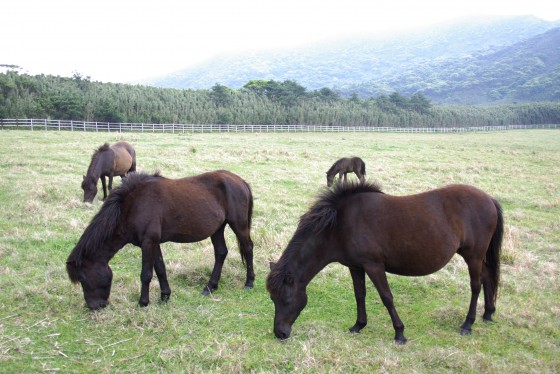 Another horse breed believed to be indigenous to Japan is Tokara uma (トカラ馬), raised in the Tokara Islands, a chain of Island in Kagoshima. They are known for their tolerance to heat and have been used for agriculture, conveyance and sugar cane squeezing.

The pony were found in 1952 by Shigeyuki Hayashida, a professor of Kagoshima University. When the Professor checked first, there were 43 ponies kept, however this number gradually decreased because of agricultural mechanization. There are now 107 Tokara ponies, some of them on display at Hirakawa Zoo in Kagoshima.

If you know any more Japanese breeds, or have something to add to the info presented in this post, please let me know in the comments. Also, if you are interested in Japan and don’t want to miss any of my future posts, please subscribe to the RSS, follow NihongoUp on Twitter, and become a fan on Facebook.