Within minutes of entering Japan, virtually all tourists encounter the phrase “Irasshaimase!” (いらっしゃいませ！), meaning “Welcome to the store!” or “Come on in!”. 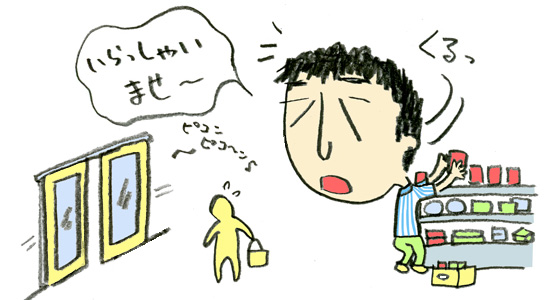 The phrase “Irasshaimase!” is a more polite version of irasshai, an imperative form of the honorific verb irassharu which means “to be/come/go”.  The phrase was originally used by marketplace sellers trying to bring customers closer to their particular stall. Over time it has become a standard greeting used at almost every retail establishment in Japan. Shop employees yell it from outside stores, inside stores, at checkouts, gas stations, sale stands, and anywhere else the opportunity presents itself. Irony is swept to the sideline as customers are told to “Come in!” after having browsed the TV department of Sofmap for 20 minutes!

Occasionally the people spouting irasshaimase are far from enthusiastic, however, some shop staff cry out with such terrifying spontaneity that the resulting shock could very well cut days from your life expectancy. I have even heard tales of sale assistants yelling irasshaimase at random to maintain their duty in case someone happens to be behind them, and even megaphones being used to terrify customers further!

Personally, I think that irasshaimase has rendered itself obsolete. Whilst visiting Japan’s convenience stores, better known as konbini (コンビニ), I’ve experienced late-night employees murmuring or woefully issuing irasshaimase as if to communicate “I hate my job, I want to go home now.” Originally the phrase may have represented a genuine interest in welcoming customers, but in contemporary Japan, it’s repetitiveness and robotic application fails to affect anyone hearing it for the thousandth time. For most people, even the employees themselves, it’s prevalence has led to it becoming a monotonous and wearisome thing that feels more like a chore than a polite custom.

Greeting customs walk a dangerous path. If a greeting is said too politely or often, it runs the risk of sounding robotic; without sincerity, a greeting becomes pointless.

What do you think about irasshaimase? Have you been attacked by store greeters before? Leave a comment and let me know!

UPDATE:
If you need an example of the ‘autopilot’ kind of irasshaimase I’m complaining about, check out this video: